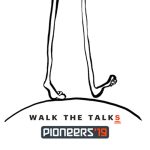 Category
EVENT
Details
With 2,500 visitors and 550 invited young companies, the Pioneers Festival is one of the largest events in the domestic startup scene. In addition, the event is almost an institution - it takes place for the ninth time, making it one of the oldest events of its kind in Austria.
Description

The ultimate meeting point for 2500 bold, pioneering entrepreneurs to look into the future and beyond. A global community of selected startups, executives and investors join forces under the roof of the 500-year-old Hofburg Imperial Palace in Vienna to redefine human tech frontiers. A yearly event of which the 2017 edition won the Bea World 'Best Conference 2017' Award.

"I think there are too many start-up events", with these surprising words Oliver Csendes opened the Pioneers Festival in 2019. "Such events are often superficial and inefficient," says the Pioneers CEO. That should be different at the big event in the Vienna Hofburg. Individually timed schedules are designed to provide every visitor, whether founder, investor or journalist, with exactly what they are looking for without wasting time. The number of participating start-ups has been strictly curated, says Csendes: "We have the Champions League of start-ups."
Through lectures by high-profile international guests, the festival aims to inspire inspiration, motivation, networking and creation.